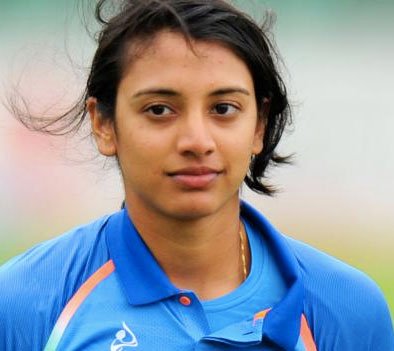 Smriti was born on 18 July 1996 in Mumbai to Smita and Shrinivas Mandhana. At the age of 2, her family moved to Madhavnagar, Sangli in Maharashtra, where she completed her schooling. Both her father and brother, Shravan,

played cricket at the district-level, for Sangli and She was inspired to take up cricket after watching her brother play at the Maharashtra state Under-16s tournaments. At the age of nine, she was selected in Maharashtra’s Under-15 team. At eleven, she was picked for the Maharashtra Under-19s team.

Her father is Shrinivas Mandhana and her mother is Smita Mandhana. Smriti’s father is a chemical distributor by profession and is one of the support systems for her cricketing career. He takes care of her workout and daily

practice. Her mother has taken up the responsibility of her daily diet and attire. She also has a brother named Shravan Mandhana, who has also played cricket till the district level.

Career In Domestic Cricket: In 2013, Mandhana’s first breakthrough came when she became the first Indian Woman to achieve double- hundred in a  one-day game. She playing for Maharashtra against Gujarat and scored an unbeaten 224 off 150 balls in the West Zone Under-19 Tournament, at the Alembic Cricket Ground in Vadodara.

She has taken so many this kind of achievement. In 2016,  Women’s Challenger Trophy, Mandhana made three half-centuries for India Red in as many games. And through her that performance, she became a part of the winning team against Team blue.

Mandhana was signed up for a one-year deal with Brisbane Heat for the Women’s Big Bash League in September 2016 and along with Harmanpreet Kaur. And they became one of the first two Indians to be signed up for the League.

Career In International Cricket: In August 2014, Smita made her international career debut against England at Wormsley Park. She helped her team win the match by scoring 22 and 51 in her first and second innings, respectively; in the latter innings, she shared in an opening-wicket partnership of 76 runs with Thirush Kamini, chasing 182.

In March 2018, she scored the fastest fifty for India in a Women’s Twenty 20 International fixture, taking 30 balls to reach a half-century against Australia women in the 2017–18 India women’s Tri-Nation Series.