Momal Sheikh is a Pakistani actress. She was born on 6 April 1986 in Karachi, Singh, Pakistan to actor Javed Sheikh and Zinat Mangi. She is the sister of Shehzad Sheikh, niece of Behroze Sabzwari and Saleem Sheikh and cousin of Shehroz Sabzwari. Momal completed Marketing and Advertising graduate from London University after doing her A-levels from Pakistan. She even worked in Bank Management and she actually didn’t have any plans for acting, she was interested in the marketing field that’s why she graduated in that. Momal sheikh started her career at a very early age in Pakistan Fashion Industry and appeared in a TV serial for the first time in 2012 on ARY Digital and she acted in many famous TV serials, some of the roles played by her are also very popular. Sheikh has worked in television serials such as Mirat Ul Uroos on Geo TV. 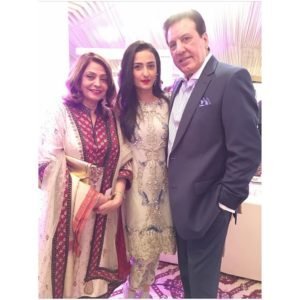 She also worked as an actress in Lolly wood movies such as Naach and she appeared doing a leading role in an Indian romantic Comedy movie Happy Bhag Jayegi in 2016.

Momal married with Muhammad Nadir. Their marriage ceremony was tack place in Lahore in 2012 and now they have a son named Ibrahim.