Lori Harvey is the name of an American model, Instagram star & Internet celebrity. Lori is better known as the stepdaughter of Steve Harvey, who is a famous American comedian, television host, producer, radio personality, actor, and author. Recently she made her runway debut during Milan Men’s Fashion Week 2017.

Lori was born on 13 January 1997 in Memphis, Tennessee, United States. She attended regular school until 7th grade before being pulled out and started homeschooling. After that, she completed her graduation from Atlanta High School in Georgia. Moreover, she also learned horse riding but she sustained a devastating injury after falling from her horse while in Florida, breaking her back and tearing her medial cruciate ligament.

Her father name  Donnell Woods. And her mother name Marjorie Elaine Harvey, who is also known as Majorie Bridges-Woods and she is a fashion designer. Harvey grew up in Atlanta, Georgia.

Her mother married to Steve Harvey, is a famous American comedian, television host, producer, radio personality, actor, and author. She has 2 siblings with 4 step-siblings. Her brothers are Morgan, Jason Harvey, Broderick, and Wynton. And sisters are Karli and Brandi. This model is currently unmarried. As per the source, she is in a relationship for a long time with Memphis Depay, who is a Dutch Footballer. Her stepfather Steve announced through his Twitter account on 26 June 2017 that his youngest daughter engaged with Memphis. Likely, Lori and her future husband announced their engagement through their Twitter accounts on the same day. 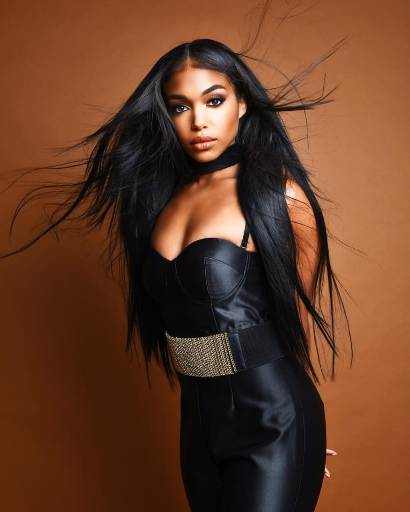 After the injury, she decided to join modeling since she could no longer participate in horse riding. She made her debut as a model in 2007. She has appeared in many advertising campaigns as a child artist.

Currently, she is signed to LA Models and Select Model Management in Europe and represented by Alex Avant and entertainment executive.