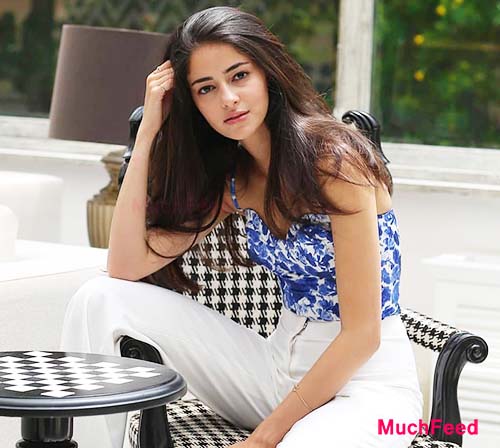 Ananya Pandey (Hindi: अनन्या पांडे) is a  Bollywood actress, whose father name Chunky Pandey and mother Bhavna Pandey. Her first movie is “Student Of The Year 2” with Tiger Shroff and Tara Sutaria.

Ananya was born on 30th October 1998 in Mumbai, Maharashtra, India. She is the daughter of famous comedian Actor Chunky Pandey and Bhavna Pandey.  She has one sister Rysa Pandey.

She completed her schooling at Dhirubhai Ambani International School, Mumbai. And after that, she completed her graduation from the University of Southern California, Los Angeles.

She is set to debut in Student Of The Year 2. Student of the Year 2 is an upcoming Indian film directed by Punit Malhotra. The film is produced by Karan Johar, and Apoorva Mehta under the banner of Dharma Productions.

It is a squeal of the 2012 hit movie Student of the Year. The movie got a massive box office for a newcomer. And from that movie, Bollywood got 3 talented stars like Sidharth Malhotra, Alia Bhatt, and Varun Dhawan. Now exaction is high for Ananya. She recently was seen with Kartik Aaryan in a post-dinner outings together. Kartik looked dapper in an ash blue hoodie and a pair of grey-colored ripped jeans, while Ananya looked stunning in a pair of black tracks and a white crop top. She will be doing another movie with Kartik Aaryan and Bhumi Pednekar. The movie will be a remake of 90 hits Pati Patni Aur Woh.  This movie is produced by Juno and Abhay Chopra, Renu Chopra, and T-Series, Bhushan Kumar. It will be directed by Mudassar Aziz.

​She is doing now Khaali Peeli with Ishaan Khatter, it will be directed by Himansu Mishra. The film is produced by Aliabbas Zafar with Zee Studio, the schedule for 12 June 2020. Music will be done by Vishaal-Sekhar. She recently celebrates her 20th birthday with her friend and family. Ananya Pandey is one of the popular star kids right now. A few days back she is trending in SRK Birthday with Suhana Khan and Shanaya Kapoor. This picture is from Shahrukh khan Alibaug’s house.